Two of my favorites come together on Saturday July 17th 2010.

Dr. Shobha Naidu is and will be one of the finest dancers that Guru Vempati Chinna Satyam aka Mastergaru (my first teacher and guru) has produced. Of course there are other brilliant gems, but a few names always stand out for not necessarily what they were moulded into, but what they made of themselves after they left coop.

I remember being a shy quiet 9 year old along with a few other girls standing at the edge of the large hall/building of the Kuchipudi Art Academy (mastergaru’s dance school) in T.Nagar, and watching the seniors walk quickly past us ‘insignificants’, into the “seniors hall”, a low separate large room in the backyard. The place where the ones who’ve made it through years of patience and practice get to enter and learn from Mastergaru himself. Where they got together to create masterpieces and intricate art, that one could only watch from far and with eyes and mouth open wide.

To comprehend was beyond the reasoning of our young minds, but to know that one is worthy of such awe is but intuitive.

Today, despite having some knowledge of the dance and the age to appreciate the nuances of the expressions; mouths and eyes still open in awe.

For the most part Kuchipudi ballets told mythological stories filled with religion. That was the original intent of the dramas. To tell a story, visually and make it go forward to the next generation. Entertaining with a purpose to keep the stories alive. So, the characters were elaborate, and simply put ‘out of this world’.

Then, over the recent years, dance has taken over a different function. Tweaked from not just trying to keep the story alive, but to spread a message, to make a difference, to make the audience think. Socialist dramas in the form of everyday living, world events, policy and a forum for creative ideas to spark off and make a better world for the future generations. The costumes got mainstream with the focus on the art form including lyrics, music and then the message. It’s charming.

This ballet that Dr. Shobha Naidu and troop will perform in the next two weeks here in the US, is not a contemporary one in that regard, but it is a recent story of Shirdi Sai Baba. 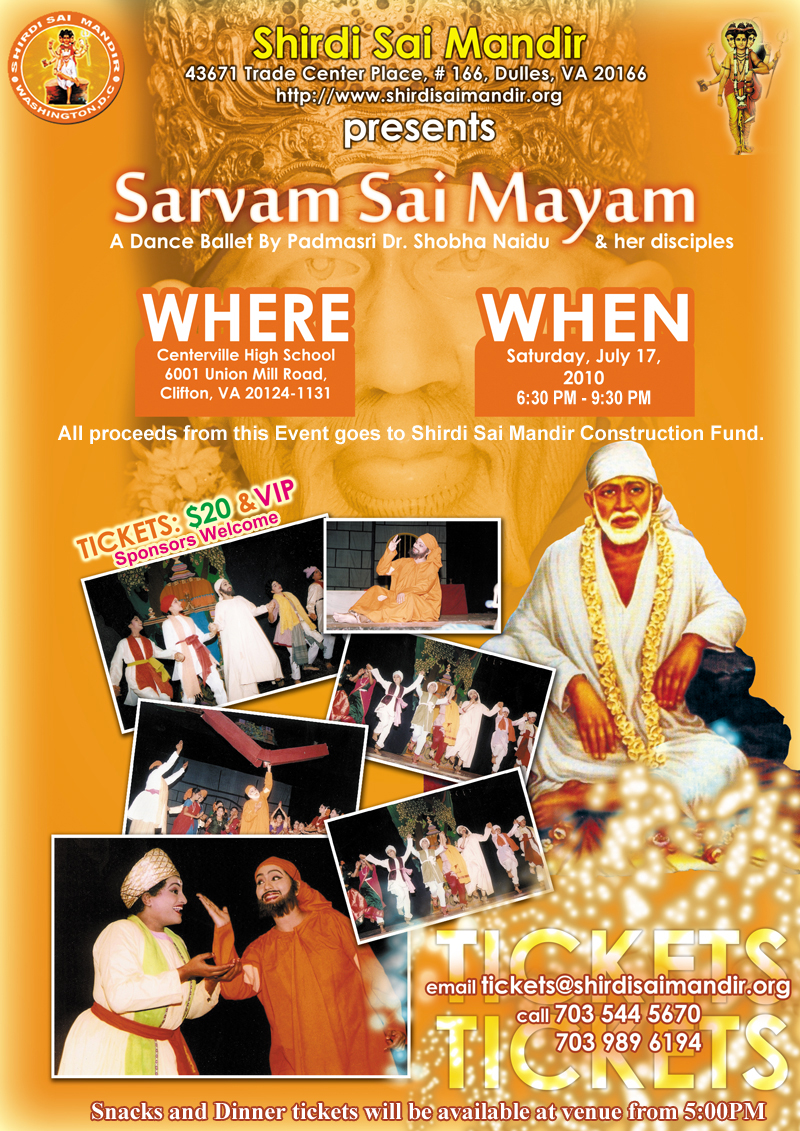 Growing up, I have never been a ritualistic or an overtly devout Hindu. Much to the chagrin of the mother, and to my frustration to not being able to articulate my thoughts to her. I didn’t care for the elaborate poojas, or the long winding sanskrit slokas which I never understood and really didn’t bother for explanations, lest I be asked to continue to pray for hours together when I’d rather be off galavanting the streets or watching TV or get immersed in my books.

That doesn’t mean I never believed in God. A supreme being or power that was in some ways steered our ways as we meander this journey on earth. Then just like that while I was wrapping college and at a fairly turbulent and difficult period, Shirdi Sai Baba walked into our lives. Literally is what I’d like to say, but skeptics are abound. One very old white haired homeless man with a cloth bag slung over his shoulder knocked on our gate at around 10:30 am and asked for food. Mom gave him something and in return he wished us well (as most elderly gentlemen do) and then looked past her shoulder and said a few lines which every mother with a marriageable age daughter would want to hear.

Except that we realized within a short span of 3 weeks, that he was very precise. To the date and name and location. Coincidence, maybe or maybe not. Depends on the state of one’s mind.

A few other events happened along that year, that made me a believer. Simple stuff, nothing strong, or earth shattering, but similar to the spring sunshine. Slow, steady, warm and chasing the cold away, removing the cobwebs off the dark corners, while making room for new sprouts and life.

Sai Baba has been my friend and companion since then. The kind of friend who isn’t always right next to you or in touch all the time, but is there when you least expect or call for. Yes, I have been selfish in my beliefs. I cannot help it, I am a human after all, and however simple and sparse my needs, there they are, wants and needs that are not always at my beck and call, but are realized in some form or the other, more likely sooner than later. The ones that didn’t happen weren’t meant to be anyway.

He has been a strength of silent support to me when I flailed and the comfort when things panned out the way they were meant to. So yes, He came into the forefront during extreme situations/emotions and the rest of the time He just stood around watching.

I think back and I vividly remember four instances when I had asked him to bail me out and He did. Sure, for the atheists and the agnostic friends, it is just life’s natural way of fixing one’s messes, but there is always the flip side to every coin. There was also the numerous happy moments, when I’d send him a Thank you towards his picture in my home, and in my mind’s eye, I see Him smile and nod and wave me away back to my business. That really was all there is to it. No bribes, no deals, no offerings and no rituals. Just a simple strong faith and belief, that He was there. No matter what.

I can’t imagine where else I would get that peace and who else can give me that peace.

I’d like for you to come watch His life story told in a dance form that I adore with my heart, body and soul. Two magnificently wonderful forms that give me incredible bliss and peace come together on July 17th Saturday at Centreville High School. Proceeds go towards the Shirdi Sai Mandir that I now frequent when life permits. 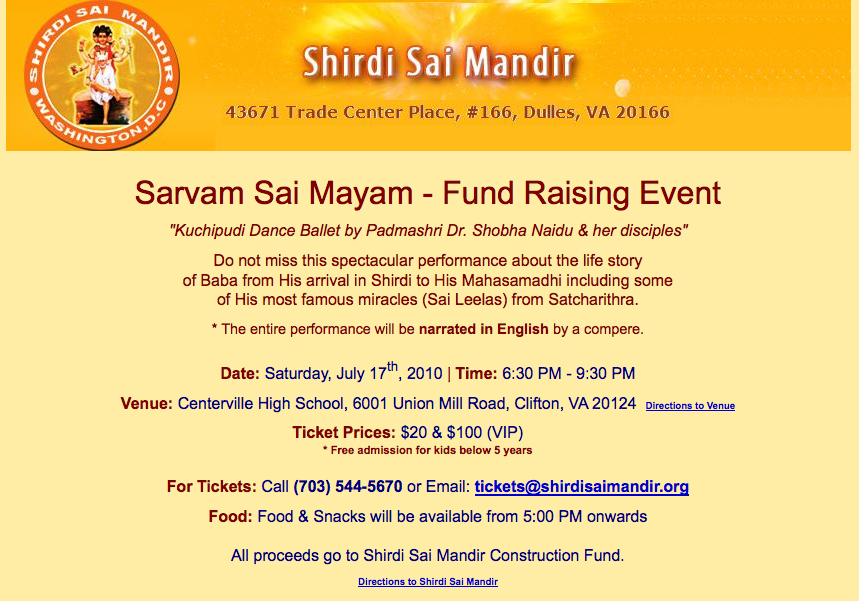 Please do share and post on your blog or twitter or facebook as necessary and if you would like to. Link back to the main page at the temple and if you are in the DC area, please consider coming. It will be worth your time, money and effort. I promise you that much.

Written By
Rads
More from Rads
When was the last time you picked up a pen, and sat...
Read More