If you haven’t watched Dangal, the new Amir Khan starrer, and you plan on watching and hate spoilers, then read no further. If you don’t mind spoilers or don’t plan on watching, then I insist you read 🙂

Dangal  A hindi movie based on the real-life story of India’s first female wrestling champion of 2010. It stars Amir Khan and a host of wonderful girls all doing their part flawlessly like they were meant to. A special shout out to the two young girls, Zaira Wasim and Suhani Bhatnagar! I loved them to bits for their deadpan delivery and the accents.

That out of the way, there are a couple of things that did jar, and primarily the message that it did not deliver, and even if it did, it was so subtle that it was missed. The movie had a great opportunity and it did not utilize it to its best. It dwelt on vicarious dreams and the girls hard work and success but was it all driven by their dad or did *they* want it? That angle was not addressed enough and maybe it was beyond the scope of the movie, so I’ll leave it at that.

I am prone to seeing things in shades of gray than in black and white, coz there is *always* something one can take away and Dangal offers some pretty neat takeaways. Dangal was a sports biopic. So, there was plenty that I could relate to considering where I am in life with respect to health and fitness and it also resonated with what I had loosely sketched out as a plan for the year.

As I watched the movie, I couldn’t help draw a parallel to success and the efficient route to it.

He was SMART in his approach.

He was measuring their success by the championship games

He was making sure the wins were achievable (modified from assignable) by doing all that it takes to guide them.

He was being realistic with his goals, he saw fire and fight in them, he honed it

He was aware of timeframes and worked towards it.

What Dangal Taught Me

Once Mahavir (the dad/coach character played by Amir Khan) realized he had a potential on his hands, he went about charting a plan with great precision and method. Nothing was left to random. Each was built over the earlier step.

Saw opportunity in talent. He thought he had lost his vicarious dream of making his son a world class wrestler, but when he saw his daughters capable of a good fight in them, he adapted and broke through the prison of thought where he once thought only a son could deliver. The freedom he chose to go against a village, town, and a society’s school of thought that only men could wrestle.

Lesson: Follow your dream and gut. Stand up against all odds and do not be afraid to challenge status quo.

Set a deadline. When his wife expresses concern and asks why he would unfairly put the girls through it, for his dream, he strikes a balance and asks for a year to allow him his way. One year to train them and see if they had the potential to develop into wrestlers, and his wife agrees on a middle ground.

Lesson: Always work with a time. Open-ended projects do not have the urgency or commitment that is warranted to fulfill it. Deadlines deliver.

Developing a fitness plan. He didn’t jump right into wrestling moves or weight training. He made the girls run to get their stamina levels up to a place where their muscles could handle training and THEN the wrestling came in.

Lesson: Work slow and steady. Build on each step, don’t rush. Know the subject and learn what is there to learn to be sure of one level before climbing it.

Limited all other interests. He didn’t allow the girls to dress up, cut their hair short to avoid time spent or the pull of wanting to dress up or look pretty. He refused for them to watch TV, attend weddings and hang out with other girls. NONE of those are BAD in the grand scheme of things, but they do take away time and mind space, and we need pretty much all of our energy to focus on the goal.

Lesson: Reign the distractions in. There will always be a time when you can catch up. Nothing in the world is so immediate that needs your attention right then and there. Let it wait.

Diet limitations. He cut their junk food and spices out, increased vegetables, and when he realized they had to up their stamina, he added in chicken despite strong opposition at home and not knowing how to cook it. (I can relate to that with raising my kids) It was good for the body, so he stepped over family values, traditions and inhibitions. No more attachment to that dish except that it provided much-needed nutrition.

Lesson: It’s so important to feed your body right, for it to perform at its peak. You will have to transcend certain inhibitions, likes, and dislikes so that your body gets its fuel it needs. Removing the emotional factor to food goes a long way in eating for the body and muscles and bones and NOT eating for the tongue.

Strong body AND mind.  He trained them in the body, but he always taught them (as we see in bits n pieces of the dialog) how they portray themselves in the ring. To be quick on their feet, to not give room, to trick, to never give up, to not settle. In the final match, Geeta wins the last round, even as she felt dejected and the burden of her earlier losses weigh upon her, only because she brought in her inner trained strength and knew that self-reliance is the only support she could rely on (Her dad tells her he can only teach, but she is the one who has to fight and survive)

Lesson: The mind, body, and spirit are a bond. Each can perform on their own, but together, they are an indomitable force to reckon with. Strengthen yourself differently, staying positive and focusing on the bigger picture.

Study what you are against. He watched and learned the moves of the opponents (in every game or dangal) and then coached his daughter to shift and strategize accordingly. To be adaptable and change according to how the game is going is smart and strategic playing.

Lesson: As much as a normal enough practice it seems in sports, it isn’t always the case. Applying it and studying other players in your field also strengthens your game. Studying your opponent’s game is time well spent.  It’s about wanting to ace the round than about making the opponent lose.

Work around your adversity. Throughout the movie, you see him face hardships. Opposition in thought, finances, opportunities denied, being ridiculed, sexism and plenty more. From when he was not given any funds, to how he was barred from meeting his daughters to prep her, he didn’t go on a war or rage or screamed for justice. He remained dogged, like a goat, staying focused and letting things bounce off him, being reliant on his own strength and determination and finding ways to work AROUND his obstacles.

Lesson: You will face obstacles. The path to success is almost always paved with them. Losing your time and energy is not prudent. By not allowing it to shake your faith and give up is how we remain steady on our path. Requires mental grit and stamina to hold on, and that is a learned skill, one that will serve well in the long run.

How does Dangal help me in my goal again?

No matter what your goal or resolution is, using this SMART method helps. Not every lesson could be applied to your vision, and neither does the above cover all that you need, but it’s a start and a framework within which we can use our instincts, trust our gut, equip ourselves with the combined knowledge and go forth.

Simply put, it really boils down to wearing blinkers, being disciplined and putting in your hard work! 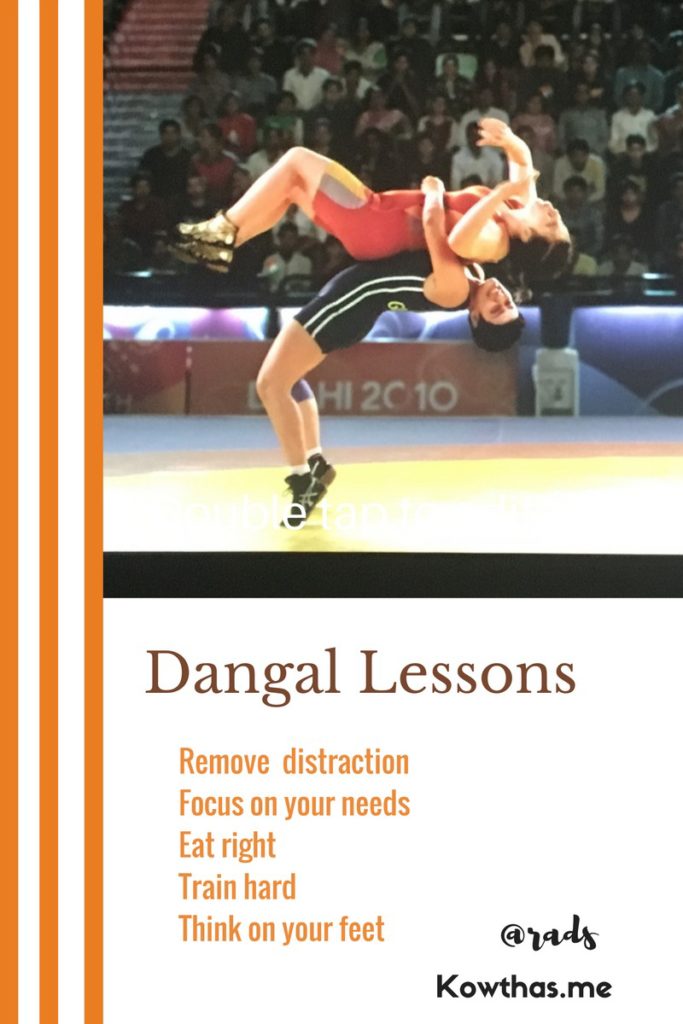 We have to do without an expectation or being focused on the goal because every single day matters. As you chip away into your path slowly, you may even enjoy the journey more than the destination. I know for a fact I do. When we enjoy the journey, it matters just a little less if the goal is achieved or morphed or has evolved into a different meaning altogether, coz the journey has done its job.

It’s taken the unready, unprepared you, and made you a thing of beauty; strong, unflinching, ready and unapologetic for becoming who you are.

An abridged version of the same post and review can be found on Women’s Web here.

Written By
Rads
More from Rads
or maybe it’s 53, donno, no time to check, but here’s what...
Read More