Before We Visit The Goddess (Referred to as Goddess below) was a book I was waiting for since when Chitra Banerjee announced it was in the works. Ever since I read Palace of Illusions, Ive been a fab of her writing. Eloquent and smooth, she has the freestyle of drawing the reader in, leaving just enough to the imagination while being articulate and drawing a fine visual of the setting and her characters.

I had reviewed that book here, in my simple style , and the internet was amazing to have brought her to comment on it!

After rejoicing and then meeting her, the bond was sealed and she remains one of my favorite writers.

So, when this book was releasing and I got a chance, I tweeted out to her, and she being the sweet thing who continues to remember me and say hello every now and then, went ahead and sent me a copy!  It was a bit of a difficult time for me with surgery and such, so I read the first half of the book in spursts, which annoyed me so much, but later ran through finished it all over a weekend.

Finally, this here is the delayed review! 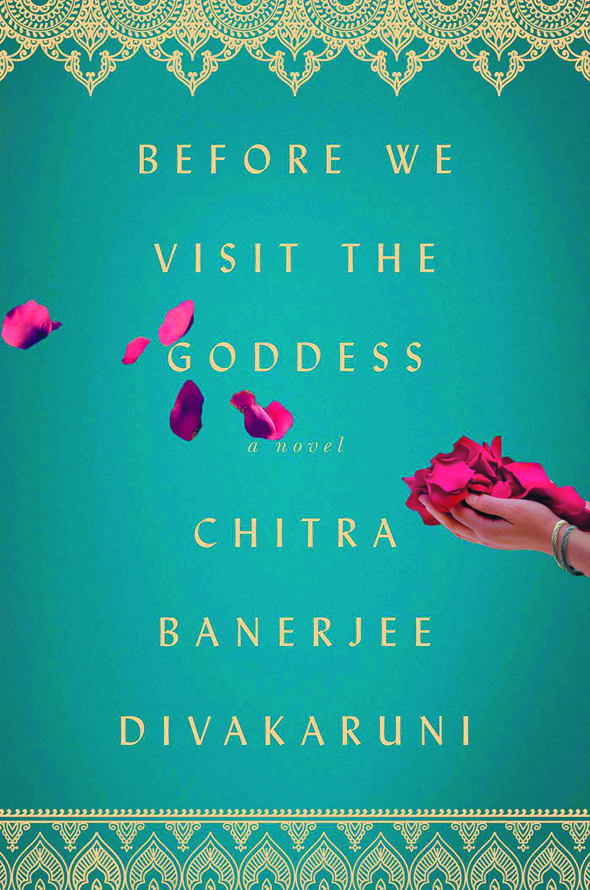 The first chapter opens into a scene that reminds you of a flashback from the 1960’s Bollywood movie. It’s brilliantly orchestrated as it shifts in and out of time and personas. Sabitri as an old woman struggling with the present scenario, Sabitri as a young child accompanying her mother Durga onto greener pastures, finding young love, marriage and education, Sabitri speaking from her experience and then deciding not to, Sabitri trying hard to be a grandmother but unable to bring that authority and affection because she does not know her grandchild as much as she would like, and Sabitri as a mother, bearing the burden with responsibility and annoyance in equal parts.

You realize well into the book that we are now seeing a vivid portrait of four generation of women, not three as widely mentioned, but four, if you have to be precise it’s 3, with a good peek of the one who started it all.

Each incredibly strong-willed and succumbing at the same time, opinionated while they blazed a trail of triumphs, mistakes, regrets and learning as we are introduced to them and we watch them grow and fade away.

The story zigs and zags quickly and suddenly and at times I was not sure of the voice of the character narrating the story and had to allow for the words to guide me through.

There were plenty characters, yet there were very few. That was the beauty of narration, where the central character (regardless of the lady of the moment) continued to hold her ground despite the continuous parade of the supporting characters and some even having their own voice. The different lives intersecting, the myriad supporting characters and their lives and how, if the reader is patient enough, they would all come together. A particular event or conversation, as un-necessary to the story as it may seem at that moment, does at a later point in time ties in seamlessly. All enhance depth, some of the character and some of the story.

I particularly liked that none of the characters were described more than necessary. I did not realize it until after I finished the book, but except for a simple quick description of what made them stand apart there was no telling the readers or drawing a clear image of how each character looked. Strangely, that didn’t diminish the narrative element of the story. Plenty parts in the story that were not tied up neatly for the reader. Goes to prove that this book is a classic example of “showing” than “telling” – a writer’s challenge.

Mrs. Mehta, Leelamoyi, Rajiv, Bijan, Bipin, Lance, David, Bianca, the Magician, the babysitter, Dr. Venkatachalapati, Meena, Sanjay, Robert, and a few more. They flit in and out of the story, each having their moment in the spotlight and adding their little piece to the drama that spans four generations of women. None leaving more than a faint imprint on your memory as it follows the main story of the women, the goddesses.

Chitra Divakaruni played with the words and imparts short but deep insights into life as the character sees it. The tone was left to be judged and interpreted by the reader, and each resonated and sounded just like they were meant to, without the danger of them being preachy.

“But the resentment he’d longed to escape settled back on his shoulders all too soon, like ash on the overcoat of a man watching in fascination a building going up in flames. Later he brushes and brushes it, but the coat is ruined”

“People get addicted to love. Or just to have someone around.”

“Ebb and flow, ebb and flow, our lives. Is that why we’re fascinated by the steadfastness of the stars? …I begin the story of the Pleiades, women transformed into birds so swift and bright that no man could snare them”

Plenty more, but some of these lines are meant to be pulled up again from memory or print, to be savored and marveled. Like the black and white photographs that always touches a cord in the heart and eye through all the cobwebs that cover them.

Without giving away details on the story or characters, this is the most I can convince you that this truly is a book that one would like to read and then read again. Brilliant story narration, I can only think back in awe of the craft. Much like savoring a delicious rosgolla that Sabitri’s created, to be eaten in small nibbles, and the aftertaste to be savored over many silent moments.

I only hope that when my modest attempt of a book comes out, I will be able to invoke a small and similar kind of satisfaction, either in content or style, that Chitra invokes in her readers. Another more important reason it took me forever to write a review that would do justice to the work she has put in.

Do read, Before We Visit The Goddess, by Chitra Banerjee Divakaruni.

Written By
Rads
More from Rads
..to mark your calendars if you so wish. (This is a sticky...
Read More

0 replies on “Before We Visit The Goddess {Review}”