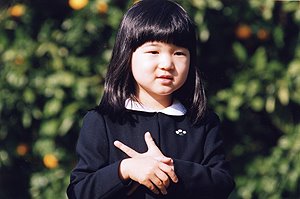 Princess Aiko of Japan (敬宮愛子内親王殿下 Toshi no miya Aiko naishinnō denka), born on December 1, 2001, is the only child of Their Imperial Highnesses Crown Prince Naruhito, heir apparent to the Japanese throne, and Crown Princess Masako. Her formal title is Her Imperial Highness The Princess ToshiIs she a cutie or what!

Her mother, Princess Masako seems an amazing woman. After refusing her beau twice, she finally succumbed to the pressures of marrying into the Royal family, and to bear an heir. After 8 years -which is long by any cultural standards I suppose – she had this cutie Aiko. You’d think this should be celebration enough, well, it was, but nope, they want a son to succeed the throne. By “they” I mean the Emperor [read father-in-law] and all the other guys who make rules and legislatures possible.
Did you know she actually had to sign a pre-nup resigning all rights over the Royal assets [ok, fine, it’s the property of ancestors, understandable] but even over her kids [so they become royal property too?!]. What bothered me was she underwent a fertility examination to prove she could bear children! What the hell is that? I mean, this is 1999 we talking about.
Because of her apparent inability to produce an heir, the Japs are thinking of re-writing their laws to let this Princess ascend throne. Quite accomodative eh? 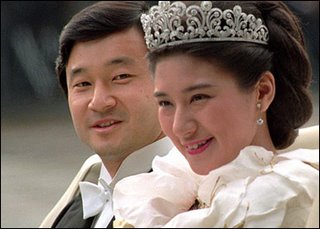 ..and where is this Masako lady from? – Well-travelled, daughter of a Japanese Diplomat, she graduated High School from Belmont, Massachusetts, yes USA. Went on to get an economics degree from Harvard, and a post-graduate from Oxford.
Her life is extremely interesting to say the least.
Read more from Wikipedia
Another conflicting portrayal

You never would really know now would you?

…..and I thought the villagers in India are still hung up on a son.

Written By
Rads
More from Rads
Of late, I have been reading voraciously. Just over the past few...
Read More

4 replies on “heir or heiress, or does it matter?”