As I was running through the reader glancing through posts of interest, I came across one where the blogger had written about he helped folks on the road with their car trouble as a random act of kindness. It felt good that despite us living in frenzied rushed selfish times, there are still folks out there who stop and donate what’s most precious – not money, but time. Nice? Yes, very nice.

This triggered a particular memory, something that happened a real long time ago.
I am a city girl. Raised in the city, parts of braving the various whims of the citylife is but ingrained. My student life pretty much hovered around taking the public transport [read PTC buses] from 3rd grade to starting to bike up to school from home from 6th grad, to graduating to the TVS 50 in 8th grade and then during the final year wangled the Kinetic Honda all the way into college and internship. Of course I had to share it with my mother, which literally meant huge beggings and being on best behavior to get it from her, but those were some really fun crazy times.

If I drive like I own the road, it’s purely from all the experience I’ve garnered manoeuvering through icky traffic and dangerously positioned autos and trucks. Those were such fun days, zooming between the mobike guys, playing race, winning some, losing some, doing stuff completely out of character, knowing fully well that you could throttle out fast if things went outa control, showing off to the rest o the bus-stop riders and so much more… *sigh. Sadly, all my bindaas panga maro-ing had to come to screeching halt when I married my very cautious town-boy of a husband and then of course I coffined it all out after just a month of driving in the US. The roads here are actually quite the bore, except when covered with ice, of course.

Anyhow, so I am pretty sure it was during the final internship year, that one really hot mid-day [redundant talking about Madras, but it was April or so.. ] I was in the Mylapore area. Now that I think back, I have no idea what I was doing in those parts and at that hour, must have been something to do with Sukra Jewelers or I’d have been sent errand-ing off to Ambika Appalam or some such. I was returning home alone on my Kinetic Honda.

The sun was burning down hot. Very hot, and I was scorching, turning a nice shade of black from an already roasted brown color that I was reminded of constantly at home. I was in some salwar and the thin dupatta wasn’t exactly helping by way of a shade in any way. These days I’ve noticed girls back in Madras wear some funky arm covers and cover their faces – Taliban style – and all visible parts of body in a neatly packaged manner. Quite like how we’d see HAZMAT warriors during alerts in downtown DC. So, with having no such gear, girls braved the sun turning the uncovered arms/hands four times darker than where the sleeve covered.

I was coming from Mylapore tank and had to take that left towards Vitan/Nilgiris or that Rangachari – Luz Church Rd is what I hope it’s still called.

Update: Got this nifty little Yahoo! maps for India comme GoogleMaps here, and I HAD to use it. You see that star, yeah, that’s the infamous spot. 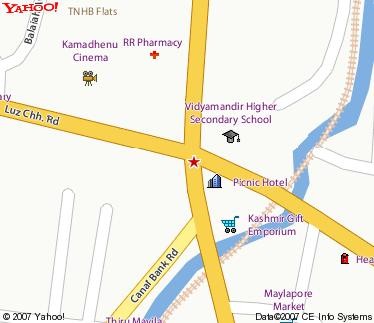 I know I missed the signal barely, and so was the very first rider and traffic piled fairly quickly behind. The green wasn’t going to come for a while and I was getting quite annoyed having to sit there with my arms stretched out at the handle bars. Frustrated, with my motor running idly and feet on the road, I put my hands behind my back. It was a bit cooler and I sat there feeling all smug on beating the sun. Of course since there’s really not much else to do, I looked all around me.

Right at my 5 o clock, was this really nice looking dude on a shiny black Yamaha. At 1sh that was a rare sight. He wasn’t a college student, as far as I could tell, and didn’t look the rugged creepy working fellas. So, after doing a double take without looking too desperate, I sat back watching the mirror. I normally have a good memory for faces and usually can transpose them years down the road, but I am getting this uncannily clear image of this dude in my head now. Ugh, so much useless stored information the brain carries, I tell ya! Okay, maybe it isn’t that useless after all…

Anyways, I am not much of a jewelry person, and on Mom’s insistence, I had on 2 thin gold bangles on my left hand, something I still have on now, and as a then new fashion accessory, a simple gold-plated kada on the right hand, a design I fell in love with and had to have – similar to the one below, except that it was 1.5 circle. [As an aside, there are way too many gold jewelry sites on the web, and then to top it, none offered the style I was looking for. People should really quit buying gold. Such a waste of money, really!]

Between eyeing the mirror image and the traffic light, more on the former than the latter, I lost track of time and sat there oblivious to the heat, until of course I was jostled by the loud honks. The light had changed. I start, and lurch forward, only to find that my hands refused to move. No prizes for guessing what transpired behind my back. Yes, in a freak twisted fate, the bangles plotted against me and the left hand bangles slipped between the open ends of the kada and there I was seemingly handcuffed behind my back.

No rush, guffaw away, I shall wait.

Needless to say, the realization was let’s say a mix of panic and embarrassment. Throw some blazing heat of the temperature kind, a very good looking dude witnessing the whole spectacle you’ve made yourself, and the angry honks behind you, I was not really having a good moment. I struggle to un-cuff myself, and was doing an extremely clumsy job of it. The bangles were snug and as with most panic situations, nothing works in your favor. I could’ve dug a hole and buried myself, and I’d still be squirming so much that the worms would plot to silence me once and for all.

So, by now, there’s enough commotion and a couple of riders were already yelling at me for not moving. This is when I turned around and the look on my face must have been precious, coz the dude in a very stylish move pushed his stand down, swung his long legs across, and with an amused smile on his face, walked up to me. I sit there flushed, as he struggles to find my wrists under the layers of dupatta and un-cuffs me. Very un-characteristically for a guy to show concern rather than a tease, he adds “You okay?” I nod, and I think I manage to whisper a thank you, when he laughs and says “I go straight, so don’t go cuffing yourself again, I won’t be there to rescue you”, and with a good-hearted laugh swings back on his bike.

I swoon, almost; wake up, and throttle as fast as I can.

Act of random kindness I’d like to believe, and no one dare say a word on the contrary!

Written By
Rads
More from Rads
There is no excerpt because this is a protected post.
Read More