It’s been a few crazy weeks. A good question at this point should be “when is it not?”

True that. It’s just different levels or phases of crazy that we console or condone ourselves with. Days fly by, and one fine day we are sitting in a rocking chair wondering which hair dye we should use for the upcoming Senior citizen evening of Bingo. Or maybe the Thyagaraja Aradhana festival at the end of the street, and which maami  will be talking about which of her grandkids’ arangetrams.

Same difference. Life blinks by too fast when you are making plans and doing nothing about those plans. Like am doing now with this post.

Anyways, through all this craziness, one wonders and if you haven’t, then you must wonder now, on the whole purpose of this craziness we put ourselves through every single minute/day of our existence.

To gain knowledge, to one-up the guy in the next cube or the neighbor, to go on that vacation we were enticed with because some ass got to go, to send our kid to the best college in town so he can get the best education and then join the rest of them on Wall Street, and earn millions to just repeat it all over again with a slightly tangential goal for his progeny.

It’s that wash, rinse, repeat routine. If it works for clothes, it should probably work for our lives. The soul is of course on a different hopefully higher circle of the same, the important word being same.

I got back on twitter recently and for the most part just sit there watching my timeline scroll at furious speeds with so much information flying at me. I click a Slate article and by the time I reach the end of the first paragraph, there comes a Boston.com with pictures, an HDR tutorial, the cute little pandas, then the lame jokes that get retweeted endlessly, just coz of who told it. Sometimes the creator becomes God. As true as that sounds, it can only really apply to very few.

Ephemeral. Our days are counted by the wisps of information on this highway. To indulge in banter and widening that network with every tweet. Don’t get me wrong, the place is and was fantastic and I was once part of that awe that delivers whatever it is that you are looking for. There are various fixes within: The let’s-have-some-fun-funsters, we-all-love-each-other-and-are-best-buddies, the holier-than-thou cliques, information junkies, i’ll-endorse-you-if-you-show-me-some-love-back ones, the endorsements, acceptances and even some masochism. All in a few 140 characters.

It’s a living, breathing creature; one that comes as close as one can get to real life social network. In all ways you can imagine.

(No more inertia to snip yet again, so please wear your plus powered lenses and read that. It’s worth it. In fact, Doghousediaries.com is a cool site. Not as hi-brow intellectual-oh-crap-am-not-smart-enough-to-get-that-joke-everyone;s-laughing-about at XKCD.com, but good and fair enough.)

It’s survival. It’s about clout. It’s about whom you know, and who follow you. As I was told in plain words “It’s all about follower count”. Am quite sure the young man spoke in jest, but he did make a point.

Everyone has an agenda. Everyone. It’s uncanny when you stop to think about it, but they are like opinions. Mine can be paltry compared to yours, but I do own one. Yes, agendas are ubiquitous.

The question I believe is: Does it align with yours? If it does, bingo, you are in. If it doesn’t too bad, keep moving.

That should be the way the real world works, after all, its the same people behind the tweets,  except that somehow it doesn’t. Not always. No sir, not for me and a bunch of others who happen to be in my real social network. Maybe we are a disconnected lot.

This is really a post about nothing. Just like Seinfeld or the pilot that George brewed up for NBC, except that perhaps it isn’t very funny. Or maybe it is. I don’t quite know how to measure the folks these days.

There was a time when humor was ubiquitous. We lived in a land of plenty. I guess we still do just a different kind of plenty. In case that was not clear, it surely doesn’t seem like my kind. Not to sound pretentious, but they were good times. The people continue on, the ghosts of their past laughs laden heavily on their weighted shoulders, fitting in with the present times, uncaring for the morphs theyve become.

Or maybe I’ve just grown apart. Differently, and most definitely slightly older. Not in my head or body, maybe just veered off in a different direction.

Seems slightly ridiculous even saying it, but there it is. By no means, I am not suggesting I’ve lost my sense of humor, but it seems to have morphed. It’s all good.

After Borders shut down, it’s been real hard to skip to a bookstore. Barnes and Noble that is. For one, it’s a bit further and these days I have made a conscious and strict rule on the miles I drive. If a destination is not within a 5 mine radius, am not going. End of story. Unless it’s my son’s school. Now that, I do not have a choice. Rest,no sir,not driving.

So the reason am ranting on this is that I still have to get that chosen Calvin and Hobbes book to make its journey around the world. I’ve had some really sweet folks mail me their addresses and am crushed with guilt on delaying this for so long. But I have a target. Monday, the book will leave my home. So if any of you book trailers are still reading this, don’t lose hope on me yet. Mama Rads is getting there slowly but surely! 🙂

In other news, everyone please do some Yoga. Serious request.

Second serious request: Adopt a pet. A pup. From a SHELTER. NOT a breeder. Seriously serious request. There are so many out there who could use a home. Not convinced? See this?

She’s a Border Collie and Norwegian Elkhound mix. Takes after the dad a lot in the way she looks. Can crouch, lasso the tail, lick you silly and even hug you. I do not kid. Except that she is a wild one when she sees a squirrel. None of us recognize her then. Provides much entertainment to our neighborhood.

That’s her crouching on the road NOT moving, coz she spotted a squirrel dart across! 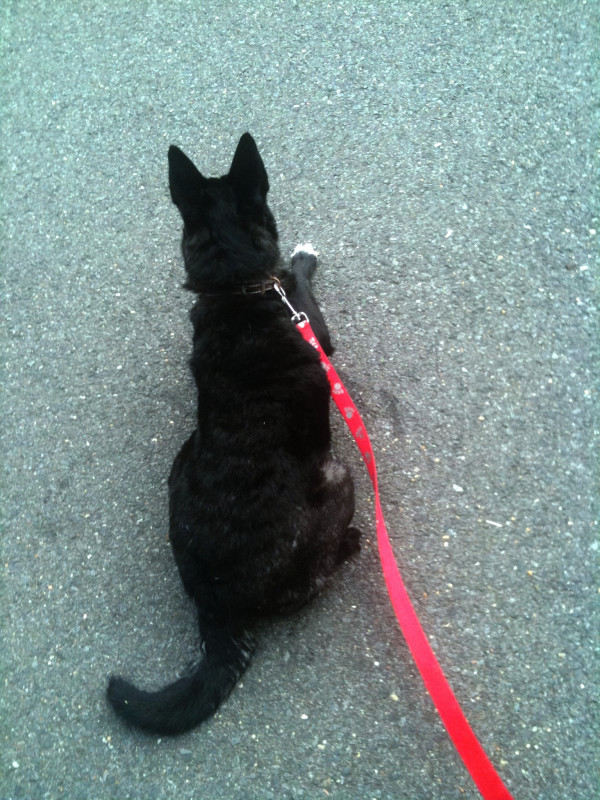 We picked her up when she was 8 weeks old, she is 9 months old now. She was my birthday gift and *I* am supposedly the one who wanted her and husband threatened to move and live in the basement if we did bring a pet in. These days, she condescendingly wags her tail at me if her highness wants, but the husband and she have been found many a time walking into the sunset despite the rains. Go figure! 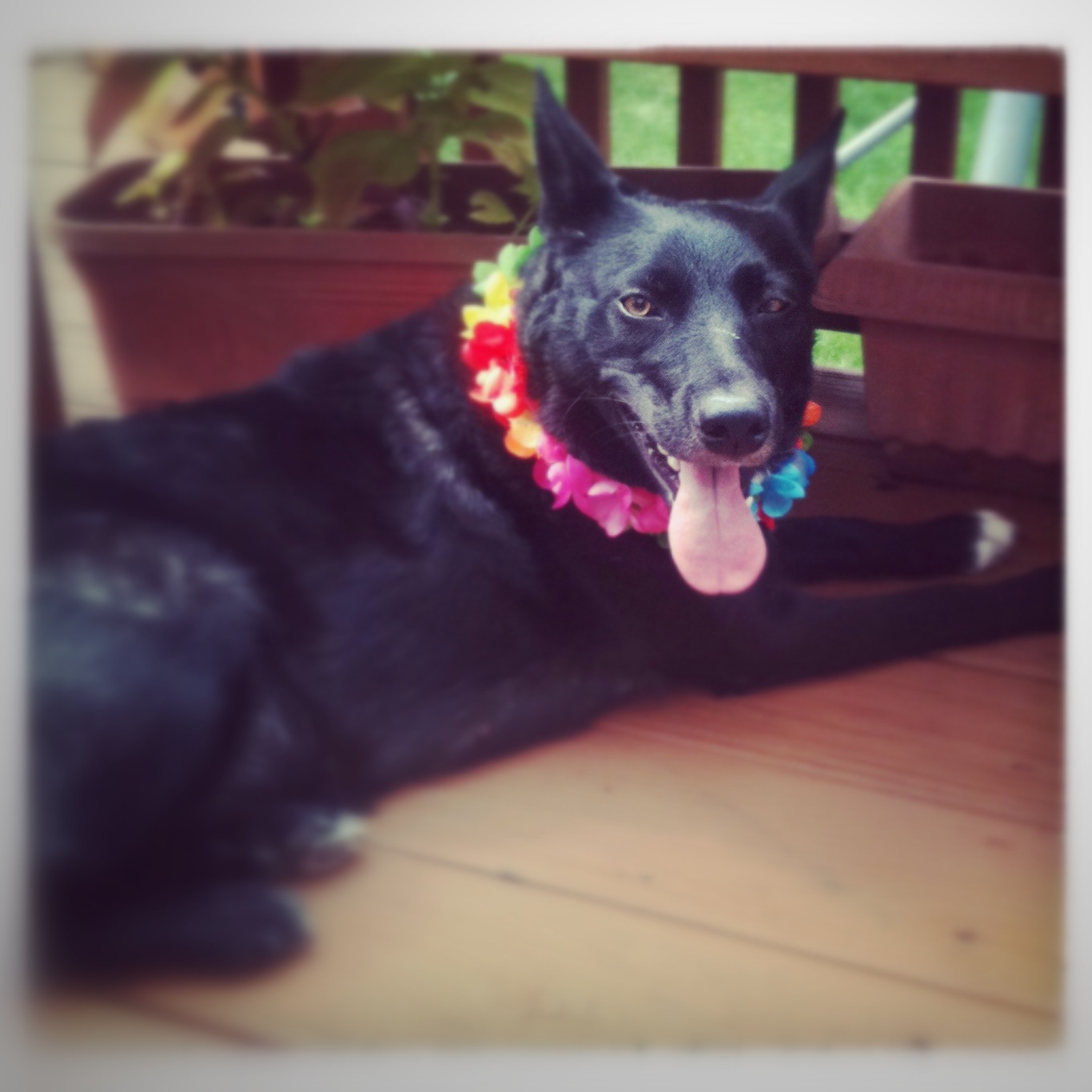 Written By
Rads
More from Rads
A couple of exciting things are brewing on my blog here and...
Read More