With halloween coming up tomorrow, I was torn between posting this fun ‘ghost’ song from the telugu movie – Geetanjali

and the scores of ghost songs and movies on the paranormal that bollywood produces, loves and thrives to a large extent. This song, however captures the essence of how the western world makes fun of the ones that cause nightmares and cold sweats.

Playing dress up is so much fun and we most certainly enjoy it as a family. Every year all of us at home make an effort to put on a wig, some paint or something comical to be someone else. Since a couple of years, the older kids are on their own, putting costumes together by just being necessary accessories than buying a whole costume kit. The munchkin has been a ladybug, a princess, a tinkerbell and this year declared she wanted to be a vampire. Till last evening when she says quite nonchalantly over dinner:

Mom, I think I changed my mind. I am going to be a fairy for halloween.

Daughter declares: Yes, mom, I need a tiara and those long white gloves, am going for this halloween party and am being a princess. Then she chuckles.

Son: Mommmy! I donno what to be for halloween, and o btw, should I be going to Francoise’ party?

Daughter: *bursting into giggles* Just go as yourself. She’ll like it.

Son decides he needs another day. His choices are “Illegal immigrant” ; “Nerd”; “Poor Indian Graduate Student (basically jeans and bata chappals – husband’s pictures from his school times helped) and “himself”

Mom has to scuttle to get those fairy wings and the white gloves and in the bargain decides she’d pick up a pitchfork. A long bought red horns, a pitchfork and a red fishnet stockings to go witha  red and black gown will be her cotume for tomorrow.

Definitely not as fun as being Joker of last year!

Husband decided he’d play the ‘man of the house’. In other words, responsible, mature and dressed in his own sensible self. Someone needs to be the guardian after all.

In teh meanwhile, last week we got “‘boo’d” – it’s a neighborhood fun tag. You pick a home, land some candy at their doorstep, and they pass it along to two other homes. Like creep up to their home in the dark and ring the doorbell and RUN! No one should know who tagged whom and you place a sign on yoru door stating you got ‘BOO-d’ Nice? As daughter helped explain to us in her usual satire: “Mom, we are finally accepted into the community! Hurrah!”

Here’s our boo bags and instructions, I thought it was a nice touch. 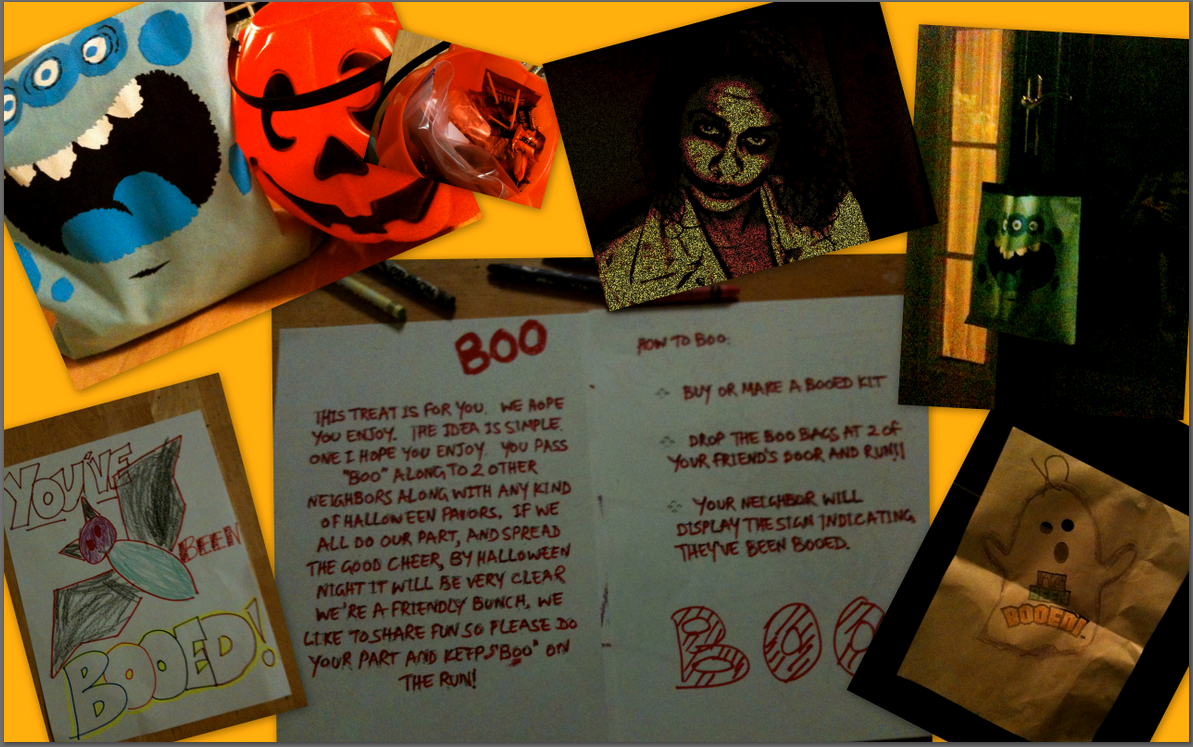 So what are you doing for halloween? It’s Saturday, though there could be some rain out here. No party, but I’l be dressing up as the devil (actually that should take no effort, coz well, am quite teh devil myself!) and hand them out goodies.

Written By
Rads
More from Rads
Just about the time when I was wondering what I would write...
Read More