Title meaning – Chipotle at my place.

We love Chipotle. As a family, as individuals, as an extended student group and as a community. I do not kid. It’s  fail-safe dish that you can bring in to any kid and hungry or not, that bowl would be wiped clean. We love it. As restrictive as it is for a vegetarian, it doesn’t get boring. I could eat the burrito bowl for breakfast lunch and dinner and I wouldn’t be tired for a few days. My teenage daughter could do the same and not blink. So can my son and so can munchkin.

I am also told that am not weird.

Chipotle’s food is the leveler that this world needs.

This would be the perfect time to insert that awesome picture I took of three burrito bowls lined and enticing us sexily, but with my organizational skills the way they are, there is no picture to insert. Instead you must imagine, coz the picture is very clear in *my* head.

I’ll instead swipe this image from Chipotle’s site and cringe appropriately. 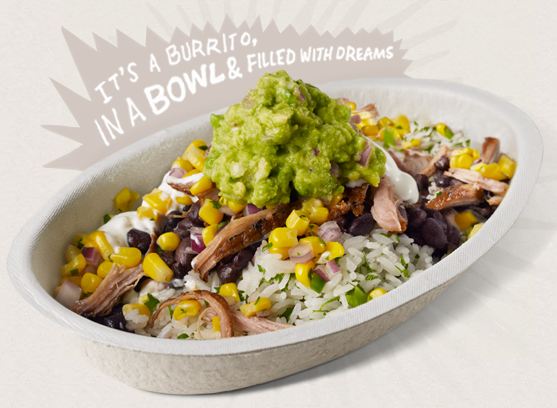 Recently I’ve become a borderline foodie. Just coz am watching what am eating and feeding the family, and so I’ve been spending some fair amount of time exploring different cuisines and calorie-conscious recipes.

I came across this site and I was bowled when I discovered that she had Cilantro-Lime-Rice and a take off on the Burrito-bowl version as well. I always knew making the signature cilantro rice was not hard. Hot rice, some oil drizzled, finely chopped cilantro and a good cup of that lime juice, with a  healthy dose of a secret patented ingredient! I also know this coz I have watched this process while waiting in line. Still, it isn’t rocket scientist algorithm and such.

Figured why not make it tonight and so I did. Didn’t have peppers so skipped that part,but off I went.

Boiled basmati rice and cooled it. Then I heated frozen cooked corn and opened a can of black beans. Made some guacamole with two avocados and onion and tomato. Had some organic tortilla chips at home. Salsa was from Trader Joe.

1/4 cup of lime juice and salt was added to the warm rice along with 2 tsp of olive oil. Mixed in the rest one by one and voila, this is what I got. 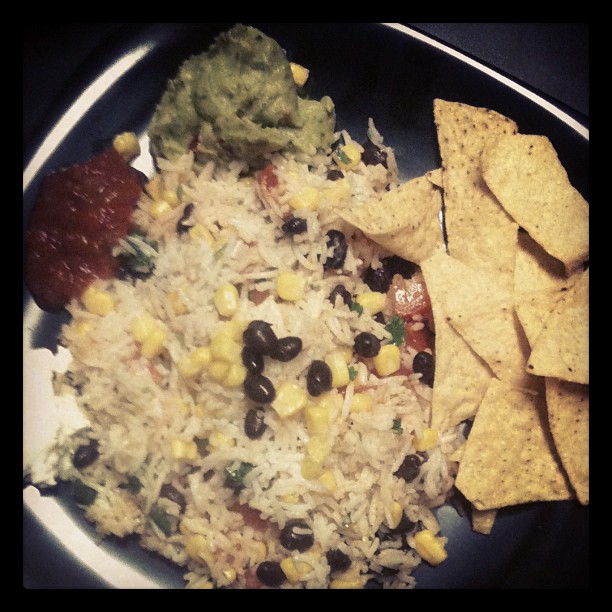 Daughter took a hearty spoon and gave a thumbs-up and continued with her head bent down. Munchkin just sucked up to me while beaming and all the time chomping at the chips and pushing the rice all around. Son liked it and suggested I add chicken next. I raised my eyebrow t him. Husband ate two bowls and then complained that I make too much rice!

It obviously does not taste exactly like the restaurant’s – coz of that secret ingredient remember? -but it comes close and very close. The trick is in the amount of lime that gets added in. Rest is all personalized to your taste.

This doesn’t mean we won’t be lining up every couple of weeks at Chipotle. That will still happen.

It’s the lure of the bowl.

Written By
Rads
More from Rads
For gongura pachadi: Anyone know where I can get this? Like pronto,...
Read More