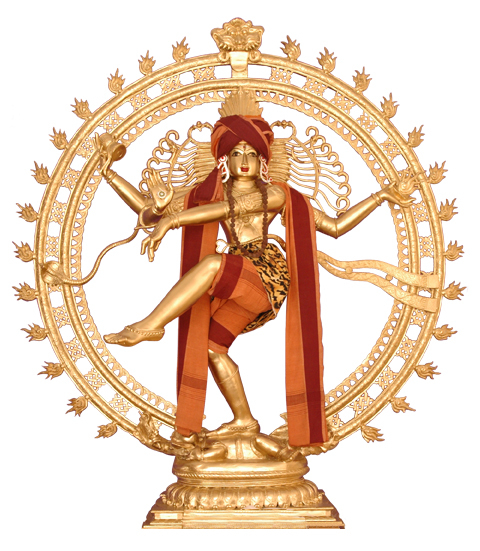 Isn’t that pretty, attractive and just beautiful? The angles, the form and just for what the idol stands for?  Love the Nataraj form for obvious reasons.

Up until a few weeks ago, if anyone had told me that March 5th is Shivratri, I would’ve done a ‘heh’ and walked on. This year’s slightly different. No, didn’t get all pious, and no it’s not a sign of age creeping up on me, [well, maybe I am going just a teeny bit soft in the head, but I’d rather go jump off a cliff than admit it!], but more because of this Sunday religious event we go to.

The daughter decided to volunteer to MC the event, and we got strapped onto the Noble King at the hip. The man hemmed and hawed and asked her to do some research and this kept going on until I decided with just a weekend in between, “mommy with the crackling whip” aka me decided it was time I took things into my hands. Up until then this Noble King was given his space and since I knew a sibling of his from another lifetime, I was keeping a respectful distance watching him pave the way. As a sudden realization that usually hit tired, busy moms on the run, I found out there was no way that was being paved! With exactly 10 days and counting, and what with school work piling and me living on the clock, I decided the whole group needed a reality check.

So the last Sunday, off I went, standing quite firmly rooted in the middle of the narrow corridor in my crisp cotton sari, and lectured to the small group – the daughter, another girl who’s older than mine but insits on behaving juvenile, and to the noble king. As he kept hearing me talk about timings, schedules, school projects, homweorks, and deadlines and fending off rapid fire questions as he’d nod and agree, his eyes got rounder, and they turned a nice shade of gray-green if I may say so. As a side note, some noble men have this sharp intelligent look in their eyes and the way they conduct themselves. This guy qualifies with flying colors. Considering he’s noble and we were in a pious setting, I kept my eyes and wandering mind in check and stayed focused. Undaunted, I stared right into his eyes and told him how time was precious and that there was so much ground to be broken into, and scripts don’t just magically get written themselves if left to just 12 year olds. An extremely hard task, but am pleased to annnounce I pulled it off. The proof lies in the amount of work that got achieved by the end of the day.

We then met a few times and exchanged bunches of emails as I’d gently prod him at appropriate times to make changes to the stories on Lord Shiva, and make them kid friendly, after I did my part. Egos needed to be stroked and accolades were handed out where due, and I played my part to the tee. The only part which initially shocked and then later amused me was that he gave me more credence and respect than I probably deserve. He’d start every mail with a namaste and tag on a Ji at the end of my name. Ive never ever been called that before. Me, a JI? That was crushing! little consolation, we conversed in English and not Hindi or Telugu, where I’d have been generously slapped with an “aaap” or a “garu” respectively.

It was weird. Like I suddenly either became a Brahmacharini, or I’d checked into an old age home. Such divine vocabulary addressed to me?!  As I reeled under the enormity of such a burden, revelation hit me. The jinx of spending too much time and email-barters with online folks. In real life [not that am not one online] I am indeed a grand mom of three.

One kid, men still treat you with a casualness, perhaps even indulge you, check you out. You are young. Just 1 kid, never mind at what age you have that kid, you are a young mom of 1. No idea ages of moms were in direct relation to their kids age, but apparently they are! The 2-kid mom. Still lookable if they manage to groom themselves, there’s a camaraderie between the men and women. It’s familiar, known territory. 2 kids are the norm. They aren’t old at all, they are very much “lookable“. Everyone has 2 kids these days and all are fair game.

Then come the aliens. Me. Suddenly, folks are completely confused, dazed and exhibit deer-in-headlights behavior. Three. They say the word with awe, with a shock, with reverence bordering on incredulity reserved just for the mad cap scientists. They are in awe of what’s done and they value their work, but seriously to do such a thing required them to leave their mental faculties behind in the land of the forbidden or some such Timbuktu.

In any case, I mused over the man’s salutations and projected it to the tri-mom syndrome. We are Ji-worthy. I must be old, in many ways. Not wanting to destroy such beautifully crafted vision of me, I let the noble man continue. After my little admonishings last Sunday, he probably thinks worse of me, but over the week I must have made some headway, coz I got a smile, and he laughed. Laughed imagine that! Phew. Ok, am not a freak after all, I think to myself. What I concur from his expressions is going on his head is “Is this woman for real? She sure doesn’t behave like a mom of 3, and her emails, Good Lord, she talks to me like we played gilli-danda back in the galis of my town.”

The guy is confused. Mission accomplished. So much fun smashing at stereotypes.

In any case, I imagine I’ve digressed more than I should have.

So yes, what with all the research and stuff I’ve managed to put together, I know Lord Shiva in and out. Ask me anything, really, I’d know. Oh did I mention I roped him [the noble king, not Lord Shiva] into describing the symbolic meaning of Nataraja’s form, as the girls show the mudras? I’d say he was quite taken, and a just a wee bit concerned that the girls had to stand on one foot for up until a count of 3.

We’d be okay, I assured him.

A little nagging doubt in my head, I wonder what the chances are that he’d stumble upon this post?

Written By
Rads
More from Rads
I signed up for a particularly daring class starting in January. It...
Read More