Movie actress Revathi will always be one of those that my generation would admire, and I am quite positive that she was every young girl in her teens/early 20’s idol. In teh way she re-defined cuteness, the carefree yet controlled dance movements, the way her eyes would become circles during expression, the little mannerisms, twirling her head, the way she’d bend half her petite size to duck and run. Little stuff, things that would set her apart from the ones who were there before and even amongst her peers as Amala, Nadiya, Suhasini and rest.

She grew from the young, brat to a lovely elegant woman along with the rest of us. 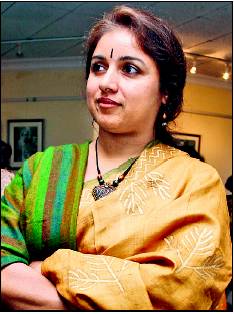 When I think of Revathi, it’s her spectacular character that she played in Mouna Ragam that pops into my head. It was every girls’ dream to be her, to realize love the way she did, coz almost all of us had a semblance of Karthik in our real lives and we all knew (but never admitted) that was going nowhere!

This movie simply titled -Prema (meaning Love) released while I was in college. She was decidely rooted into movies – Tamil and Telugu – and being the giddy young girl-woman, I promptly loved the movie. It was about, what else, Love, and the road it takes to start, bloom and then very prematurely die. Hated the part when she dies. All the more hated it coz well, her death was very  cleverly based on medical facts. The guy who wrote the story actually did some research and me being the snobbish medico, was sufficiently impressed as much as I hated his guts for murdering this wonderful full of life character! I don’t think the audience, especially the Telugu crowd liked it much either. The movie didn’t do so well, but I could be wrong, as I did not exactly grow up in that area.

She played Maggie in the movie, and she took way more pills than she should have and they all worked against her ultimately. That is all I remember and then this song.

Venkatesh, the actor was never a huge hit with me. He somehow couldn’t act much, nor was her versatile, and his diction was off. (Yes, I was a snob again when it came to pronouncing the words the way they were meant to.) Yet, this movie, there was some amazing chemistry between them and this song below showcases it excellently.

Tuned to the Maestro’s music, (which is always a pleasure to hear even for the tone-deaf), set to romantic lyrics by Veturi, where the sun, moon and time stand still for the lovers to revel in their moment, this song has an appeal to all young either at heart or in love.

The moment when one realizes the complete freedom in surrender and the ecstasy of being in love. 🙂

[Love the strings at 1:01]
Lyrics with a very literal (not poetic at all unfortunately, and any and all corrections welcome) translation:

manasE immannadi adi naa sOmmannadi
[To give your your heart, as it belongs to me]

suryani maapi chandruni aapi vEnnEla rOjanta kaachindi
[It tricked the sun, stopped the moon and let the moonlight shine through the day]

kalalE vaddannadi nijamE kammannadi
[It said there were no dreams, just the reality was beautiful]

In hindi – Chitra’s voice again, a voice that makes one feel love choke them even when they are not. Some voices have the power 🙂

Written By
Rads
More from Rads
Instead of posting about my gorgeously good looking brownies I baked this...
Read More