Everytime I go to Grand, I do a quick peripheral round of the store. Attack the veggies, run past the yogurts/drinks, check the frozen ones, and browse the variety of fancy utensils. The utensils and plastic stuff remind me of ranganathan street – a fancy one, but nevertheless Ranganathan Street/Pondy Bazaar. Little gizmos which speak high of the usage and importance in your kitchen, the thousands of ‘make life easier’ gadgets – they are fun to look at – laught at too. Some are really quite useless, but I bet there’s a market for it, or it wouldn’t be on that shelf.

ok, Korean/Asian stores are interesting places. That is probably the only language I can never understand. It isn’t roman script for starters, and then it isn’t any other language’s distant cousin either. By other language I mean, ones I know – a handful of desi ones, and French, and a spattering of Dutch. I read and understand Dutch better than I talk.

I would love to buy some of the stuff they sell – local to their cuisines, but I donno what the heck is in it. Being vegetarian again just about destroys most of your adventurous free spirit! The variety of noodles, and the soya stuff, how about all those sesame seed oil bottles? I can’t get a guy to translate it either, coz most are either mexicans who don’t know Mandarin/Korean, or Korean/Asian guys who don’t know English. Very annoying!
They eat tons of green veggies. The number and variety they have is almost the same as the other non-green ones they carry. I tried their mustard once for sarson ka saag, and it was delicious. The taste was tangible – not that I did a good job. It’s one of the most foolproof easy dishes you can impress anyone with!

ok, and this is what i discovered in their snack aisle Jackfruit chips. I stop, and look,and try reading, and hey, it’s there in English – Jackfruit chips, a faint picture of a jackfruit is in the background as well. Vegetable oil and jackfruit are the only 2 ingredients. It says it is $1.49 – it’s cheap enough to throw if I hate it. So, I buy, come home, rip the cover off, and take a brave bite.
It’s crunchy,looks like shriveled up jackfruit pieces, no imitation there, and the smell – omg!

Nungambakkam station, am dragging my sister’s lunch bag along with mine, trying to keep pace with my mom’s steps – hungry and tired as hell – hot and thirsty – and the only known meal is a good 10 minute walk away. There is this lady selling jackfruit on her bamboo basket – but nooo, we walk stiffly past her, coz mom claims it’s dirty – flies and dust – you can’t wait another 10 minutes. If you had eaten your lunch completely, you wouldn’t be hungry now, walk fast! 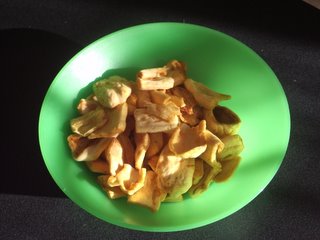 Boy, these are delicious – finally, after all those years, am eating fried jackfruit from a Korean store in US Of A.

I am pretty positive I will be the only one eating the whole box, DH would claim it isn’t hygenic the suspicious guy that he is. Oh well, it does have a slight bitter aftertaste to it tho’ …

Written By
Rads
More from Rads
Had Chinese takeout Thursday evening and at the end of the dinner,...
Read More