Last year this time, my son left for college. He decided to pack bags and leave to a state that was a whole hour behind us. One that would take 3 hours on a flight to reach. We instead decided to do a road trip through 6 states to finally drop him off. That was our vacation, I declared much to their shock. It will also help us stretch the time we have together. That shocked and scared my kids even more, and the husband stared through me, with an air of resignation. One that is more or less a constant these days. I merrily went about planning it.

There was a plan for everything. What to buy for school, the clothes, the shoes, the hamper, the bean bag, the school supplies, and the food. This while trying to get him to sit still between the numerous friends’ visits, the parties, the hanging outs, the friends farewells and well, the sleeping. Did I mention friends?

Through all of this there would be an occasional exclamation. A whimper. An Oh God. An occasional lump in the throat. A more common Cantwaitforallofyoutojustleave.

You get the point.

It finally happened, and that morning while we went through the motions of setting up room, and squabbling (yes, we squabbled there too!) and then the breakfasts and the orientation, and then suddenly, the man in charge was telling us parents that it was time to say our goodbyes and to go home. 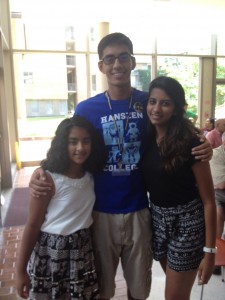 Everyone looked at each other expectantly. Hugs passed around. The siblings just being siblings. Husband was being husband and just slapped the son on his back and did the awkward thing that dads do with their sons. NO, not like in the movies. They are not human or real!

My head was a mess. Do I let go? Do I break down and become a mush? Would that embarrass him? He was expecting me to embarrass him anyway, so should I? Or should I be the cool mom and just grin and wave goodbye after a peck and a hug? Or should I just admit halfheartedly that am not really heartbroken? Not that minute anyway?

I looked away in search of other moms and saw a handful of them in different stages of goodbye.

NOT A SINGLE WET EYE!

I’ll let that sink in.

On that note, they must serve some wine at these orientations, for the parents I mean. We all could use it. After an overwhelming senior year, and the prep and the college admission process and the praying and the hoping and the drama and the emotional upheaval, the least the colleges could send us off home after taking our kids and our money, was ONE FINE GLASS OF WINE!

Is that really too much to ask? I thought so too!

In any case, where was I?

Yes, at the juncture of pondering if I should bawl or not.

I didn’t cry. I just choked a bit. Hugged the boy, who also looked like he was torn between hugging or crying or bolting off to join the rest of the freshmen gathering outside the glass windows of the large hall for their tour, and I saved us both by NOT bawling.

See, moms always do the right thing for the kids, even if the kids don’t appreciate or acknowledge that then.

So I hugged him, and then reached very high up and kissed his cheek, and said you take care ok, and be good and good luck and stay smart and safe. Or something to that effect. He nodded his head sagely while looking down at me (in case you wondering, he is 6 inches taller than me), put his long lanky arms around my shoulder, and hugged me. Then looked at his dad and sisters and said, Ok. I smiled through misty eyes and said a bit more gruffly than I expected, Okay, let’s go, it’s getting late for him. Bye nanna.

..and we walked away from each other. He out through the doors to the right and was swallowed by a sea of blue shirts and bobbling heads and we turned left and towards the path that would take us out to the parking lot.

We came back home in silence, mostly interspersed by the logistics of the daily grind.

The next night, as I planned dinner, I wondered if I should make Italian or just plain fare. Then remembered he was not here for dinner. Then when I placed 5 plates on the table and then reminded myself that he was not home for dinner. Then I called them all one by one. Guys, come down for dinner. The girls come down and I, in that moment of maternal tomfoolery, said Can one of you go yell for him, he is always late.

..and then I turned my back to them and bawled my eyes out.

Written By
Rads
More from Rads
So we get this magazine called “Life Experience” a publication of Lifetime...
Read More