I had read Anita Rau’s Tamarind Woman a few years ago. A friend at the college allowed me to borrow it. All I remember of the book was how true it rang to me, and the fact that I finished it within a week and returned it to her the next class. So while on a recent trip to the library, I saw the book lying in the returned pile, I grabbed it, just out of recognition, and couldn’t place it back.

I have always enjoyed re-reading books. During the days of good old times as a child, and when books were scarce in availability or access, I imagine I started this habit of re-visiting the words, story and the characters, for familiarity and especially the surprises that I missed the first time around. Words and phrases formed newer meanings, ones that may have been there all along, but now jumped up and showed a different view, a hidden emotion and even a twist to the imagination. 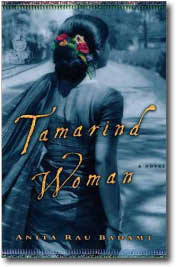 This book ranks as one of those that clearly is “un-put-downable”. If you had the luxury of cozy-ing into a chair next to a window cocooned in a silence around you, and allow yourself to be transported into the journal, the experience is complete in all ways. Then of course there are the others, like me, who are forced to go at snail’s pace not out of choice, but the distraction around is so heavy that it would surely be a crime to read such a beauty half-heartedly.

For the most part, I imagine, readers love, hate, or are indifferent to a particular book or literature (fiction especially) purely on how much they can relate to it. Are the characters one can relate to in real life, can one imagine the words, do they ring true, believable. Do they appeal to one’s inner muse? Is the story believable? Even in fantasy? Is it identifiable?

Tamarind Woman does just that. With just a handful of characters and spanning two generations of strong women, each from their own childhood, youth and then as adults, the book sways you in and out of time. The initial two-thirds of the book is all about the daughter. The daughter’s autobiographical journey as she tells us in flashback of the events that twined her life with her mother. The details, the small yet important facts, memories, the conversations, and the yearning. The story shifts again in first person but this time the mother – the tamarind woman – racontes teh verys ame events from her perspective. The present is now a journey on a train as the mother spins her life’s weaves into occasionally shocking but spell-binding and interesting tales for an audience.

What I especially liked about Anita Rau’s storytelling was that she made it all seem very real. This isn’t a feel good, loving story of a happy traveling family, but mostly very common placed for an average Indian household of the 80’s. The customs, traditions, though not elaborately told and described, all form an intricate pattern into the larger picture. The conversations, the words the author uses throughout, are quite Indianised in may ways, but that is besides the point. Considering the numerous dialects and languages we all come from, one can easily translate the words into any local language and it would ring true. It would be hard not to have met someone who fits the bill, or to close one’s eyes and almost hear a voice from the past who would speak those very same words.

The Mother – Saroja – in many instances reminded me of my mother, a few times of me, the relationship between the two reminded me of how I would talk with my mother. It’s all a big time-space-relation warp. For folks who’ve lived in “colonies” back home, this book would be a trip down memory lane. By colonies I mean, by virtue of being a Central Govt employee or a bank employee, the living quarters are all within a scheduled area called a campus. A place where there is a heirarchy designated by the rank of the husband/dad’s role at work. The luxuries, the issues and the challenges that come out of sharing space and to be on a constant vigil of one’s own behavior as the repercussions are stronger than just a ripple in the  lake.

So yes, read it if you can. You will laugh, smile, wince, marvel, gasp, admire and be surprised, but you have to watch out, as things are not clearly laid out for you all the while. Reading between the lines brings the essence of the fine visible words one actually reads.

Truly wish the author would write again. She seems to have stopped after Hero’s Walk and Tamarind Mem.

Written By
Rads
More from Rads
A tale that practically wrote itself. The words tumbled out with intensity...
Read More