I had lunch with a friend yesterday. Both needed some air after the election results and instead of sitting alone and knotting ourselves up into a frenzy watching social media, we decided we could get together. It’s beside the point that we got together AND proceeded to knot ourselves up, but at least we had company in our misery and disbelief.

At some point, hunger kicked in and we decided to go grab some soup (it was a horribly cold gray day in DC yesterday) and a sandwich at a nearby place. After paying for our meals, I found a corner table. Corner with an adjacent half a wall to the corridor beyond which the salad bar was placed. This was your average American cafe with subs and soups that I have visited plenty times and the staff is wonderfully warm and friendly.

We each dug into our soups and salads, which were delicious I may add. The table next to us (away from the salad bar) stayed empty for a long while. There were enough people milling around and most were retired folks (coz it was a working day) and a couple of young couples who looked like they worked at the nearby offices.

We were nearing the end of our meal and were quite deep into our conversations that did not hover around elections and such, but more pleasant things like shopping and movies. That’s a rare thing for me, but hey, a girl’s got to wind down occasionally. I happened to look up and noticed an elderly couple seat themselves at the table next to ours. They, as expected, took the chairs that were not closest to us, but at the same table. It’s called space.

After a few minutes, I noticed the lady, who seated herself diagonally across me looking towards my direction. Now, she was elderly, easily 70+ and had her glasses on and was heavy. Because am made that way, I immediately noticed that she had a squint in her left eye, and the eye rested out. Am sure it was cataracts. I looked at her, and not getting a smile or an acknowledgement or purpose why she was looking this direction, I ignored and continued listening to my friend.

I realized with every passing moment, I could sense her eyes on me.

I brushed it off and continued.

She had her purse open and was looking through it, and then again, she looked at my direction, cupped her chin and stared.

Now, this kind of staring is just not done. No. No one stares at anyone. Not in my 23 years of living here and regardless of any age, race or place. People hover the polite 2-3 seconds and then move on. Unless of course there is a toddler involved, then they are allowed to stare at anyone and anything forever.

So again, I turned and looked at her. Quizzically this time. With my brow furrowed, and I almost opened my mouth to ask her if I could help her? I stopped short, coz suddenly, she lifts her hand up and gestures and waves her head and hand in a no.

It hits my head then that she is looking PAST me and as the realization clicks together, her elderly husband is walking past us, exclaiming in a loud voice “But you said you liked these muffins, so picked them up for you! You don’t want them now?”

My friend and I look at each other and realizing we both thought like fools and chuckled and then laughed. What was interesting as we both discussed that moment later was that how aware we became. How a simple election and the united reaction or pockets of folks who believed otherwise had shaken us from within. A seemingly simple everyday occurrence that now suddenly rang strange.

It had an alien ring on it.

There was a lingering rankling annoyance to it.

I shouldn’t have to feel this way. I never felt this way. So why am I?

Is it just the knowledge of being made acutely aware that am different, that am brown and that half the country did not particularly care for me or my kind? But I am an American? America is NOT all white or brown or yellow or black. It is a pot, a potpourri. We ALL belong here. That was the basis of my life. A land built my immigrants of one geographical region and decided they would welcome immigrants from all other lands.

I have never felt more a belonging than I have felt here, where I live. (Check these set of tweets which pretty much summed my exact thoughts) 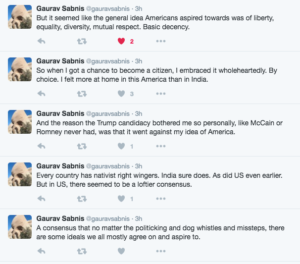 I visibly shook myself to get rid of this doubt that had taken seed in my head. This is the beginning, isn’t it? I asked my friend and she said, it’s probably just us. The first generation. Our kids are okay. They know not any other place but here, this is their home.

As we get up, my glasses fly off the table and close to the elderly lady’s large bag. I slid myself through the tables to pick it up, but she had already slipped her hand down and picked it up for me. Handing it to me, while I smiled a bright Thank you at her, she broke into a grin and said, “Have a nice day hon!”

I wave and cringe deep within me as I knock my head a few times. How flaky are we to allow a disturbance to seep right into us and act on it. How steadfast are the many who despite the disturbance hold strong onto what makes us all good simple humans.

Our heads. The ones that can make us, as much as they can break us. Our wonderful simple but complicated heads.

I believe in this country, and I believe the foundations on which it was built. The ideals and the grounds on which the legislation and the constitution it stands tall on will overcome any single person’s presidency or a group’s narrow acts based on their skewed ideologies.

Written By
Rads
More from Rads
A couple of weeks ago, I bought myself a new bag. A...
Read More

0 replies on “The Second Side Glance”