Came across this wonderful collection of essays, biographical sketches, poems and anecdotes by various real strong women out there in the world in an anthology of sorts titled: “33 things every girl should know” 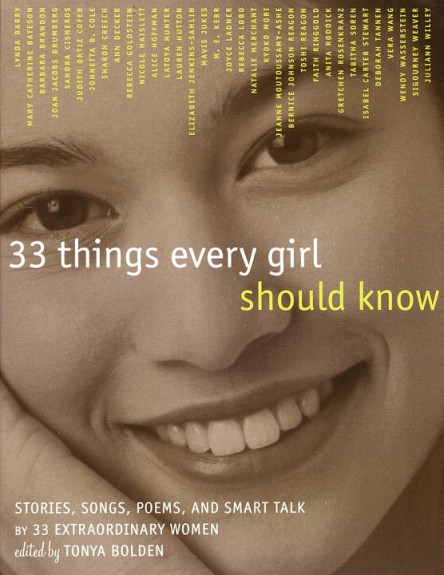 There are some gems within, that brought some amazing eye-opening visions into my muddled head and I can only imagine what a source of strength, resilience and hope it can give to a young girl coping with adversities and the realities of the world she grows into. The stories, mostly subtle also drive home a point to ultimately value and treasure the fine young lady that one is within each of the girls, and most importantly to become a sensible level headed human being despite it all. Someone that’s strong yet sensitive to one’s own self while knowing when and how to prioritize the needs and wants at different levels.

33 different stories told by real women, and this one story stuck out to me. An explanation as to why one would behave the way one does, despite the age.

When a 55 year old woman jumps with joy like a 6 year old getting her first pink bike, or when the old man breaks down into tears when he discovers his favorite book isn’t lost after all, or when a teenager plays with her barbies in her closet, or when the grandmother secretly stashes the lollipops that her grandson brings form phoren, or the time when a 35 year old man whines at the sight of a flu.. (oh, okay the last is a flaw more than an attribute to this concept, but we’ll let that slip) … and similar such behaviors.

When we act out of our prescribed age bracket. The occasional random acts or thinking patterns of neoteny that almost all of us exhibit, some brazen enough to not care how they are portrayed to others (like me) and then the large bunch of closet “juvies”.

I like this concept of Sandra Cisneros that she explains in the essay; Eleven (an excerpt here) and the downloadable pdf here.

Because the way you grow old is kind of like an onion or like the rings inside a tree trunk or like my little wooden dolls that fit one inside the other, each year inside the next one. That’s how being eleven years old is.

I like that concept. Now, I can go sulk in a corner or throw a fit at the husband and claim to be an irrational 12 year old. Except that it may just not fly with him as much considering my 12 year old’s a precocious little bundle that am massively proud of myself and I may just look more stupid than well, cute.

Written By
Rads
More from Rads
single. standing apart. you could tell by the way she looked. her...
Read More