Last evening I spent watching Shobhana and her troupe of 7 perform the dance drama – Maya Ravan..: a fund Raiser for AID India. This venue was a last minute addition to her schedule and with just 3 weeks of advertising and organising the MD AID chapter did a good job of getting the house full. Some stood the whole 2 hour show as tickets were oversold.

And what a show it was! 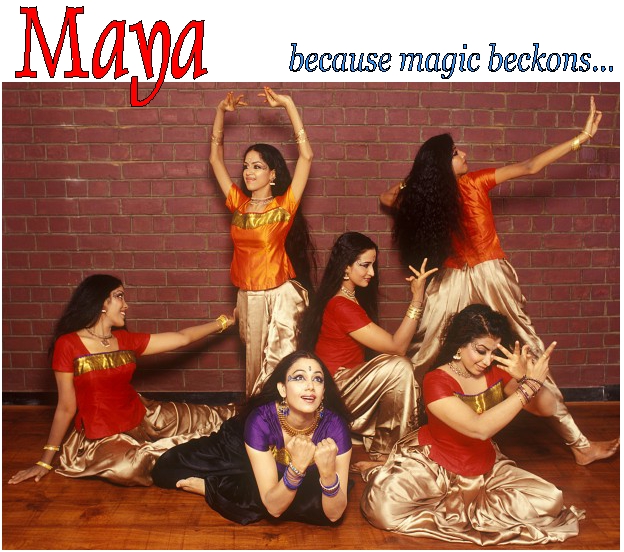 Shobhana has always been a good dancer and an award-winning actress in Malyalam. [I specify as her telugu roles weren’t really what she was meant for.] Versatile as she is and the maturity she exhibits on stage is remarkable. Of course she has the added advantage of being born into a family of dance and arts, but then good genes can only take you so far. What I admired in the performance was her creativity and how she broke away from the norm in bringing Bharatnatyam to the common man.

When you think back, arts all over the world have been privy only to the educated, and the rich. The language used, the medium and forms was hard to understand by the common man. This way of breaking down classical steps into more layman’s language by using Bollywood music, the western classical, flamenco, while still holding onto the raaga, the bhava and the taala requires a certain grasp and understanding of not only the art but to consciously force an open mind. To quote my favorite line “think outside the box, the options are limitless”!

Yet, anyone can choreograph and direct dance. I can too, and if you’ve dwelled in it for a while, the confidence drives you to experiment. To make it commendable and make even the staunchest of connossieurs nod their head grudgingly, as well as get the ignorant to tap their feet requires a certain dedication, foresight, skill, sensitivity and command.

Maya Ravan is a good blend of all of the above. Shobhana’s portrayal of Ravana is at best simple. Therein lies the depth. Kids in the auditorium laughed when she smirked and goofed as clumsy Ravan, a few clapped with joy when she portrayed Ravan beaten in the war kid his wife with a wine goblet, the way she’d shrug her shoulders, swagger on and off the stage as the haughty ruler. The lift of the eyebrow, the smile, the lust in the eyes as Ravan tries to grapple with Seeta, the mockery, the taunting, the anger, the quizzical confused looks…

The nuances are plenty. The mannerisms such that though theatrical seem common placed. Like you could be doing that in your living room with a Poker buddy, with your wife to make her laugh, to cajole, to win her over when she pouts, while brusquely showing off your muscles and establishing your place.
The English dialogs – Indian English add a whimsical authenticity to the show. Naseeruddin Shah, Milind Soman, Suhasini, Jackie Shroff, Revanthy lend their voices. Funnily, apart from Naseeruddin’s gravely voice, I could not place anyone else’s! Maybe because they spoke English, and I was expecting to hear Suhasini in Tamil or Telugu, or maybe I was just too taken with Shobhana’s body language that I couldn’t distract myself any other way.

One can’t help flash back to the farce that’s called SethuRam project now, as we watch on celluloid the monkey brigade build the bridge. The imagery as the clip played for us, was strikingly beautiful.

I absolutely loved her AR Rehman’s rendition of Vande Mataram: depicting India in all its glory, as dancers moved across the stage enacting the various facets. The epics, the history, the great people who walked our roads, the modern world, the fashion shows, the pagaentry, the India as the world knows now. The crowd clapped in glee, when all dancers lined up as seated in cubicles, and dramatically enacted us [yes, u and me] behind our laptops furiously clacking away at the keyboard. Vande Mataram could not have ended any better than with a portrayal of our good old cricket, as a dancer rolls on the floor with her hand raised in catching an imaginary catch, Shobhana raised her hand to signal ‘out’ amidst laughter and claps. Defining moment I tell you!

The costumes are new, colors subdued yet defining. Some wondered on how they could change a whole outfit under 2 minutes, all I can say is “it’s an art, and it comes with practice” 🙂
Her troupe is remarkable, and each one deserved a special mention and applaud.

As a dancer myself, it is with excitement that I watched as the familar steps and body movements could be intermixed and produced with such sringara, such bhava, and such novelty. Refreshing.

Written By
Rads
More from Rads
This is my 20 minute Ganesha from good ol’ modelling clay that...
Read More