Saturday was an interesting day and the evening did not go as planned.

After a hiatus of a few years, husband and I felt we must show our loyalty to his workplace and holiday party this year. So, the last minute scramble to pick up a decent enough holiday dress was on. There is so much black and red in the outfits, that if you don’t choose the black well, you may look like you are going for a funeral. The guys however can skip between the two with just a change of expression. I am sure the design/etiquette gurus who came up with the protocol were all male.

So the ladies (espeically the Indians, coz we want to blend and yet not all cannot with our limitations) and look elegant and stylish all the while looking like this was how they dressed forever since a child. So, I also joined the ranks of finding the perfect dress and what with how my body has been treating me over 2011, I was not feeling the love to go splurge on it.

Cutting a long story short, as festivities were under way and dinner was being consumed but before desserts came into the picture, we we gently ushered out into the biting cold by a very straight faced usher. “Please evacuate the building in a calm manner please” we were told. We did. Then we were told that there was a threat in the building. After a few more minutes, with flashing lights and red trucks crowding our way, we were asked to leave and go home, or wherever, but not stay on the grounds.

Ladies were right annoyed on their evenings shot dead, after all the pains we take to come unwind. With the evening still young – 8 pm- , and kids taken care of, some decided to hit the local bars, nightclubs, some congregated to friends’ homes and some left for the movies.

We, naturally drove to the farthest movie hall (coz the movie was limited release) and barely made the tickets for Mission Impossible 4, 20 minutes ahead of time. It was a busy place and a Saturday night, so teh crowds were expected, but the initial jaw-drop happened when we were ushered in to stand with a crowded group of people near an entrance.

“MI-4, this way please, can you move forward, make room for others folks, easy does it, thanks all!”

Hmm.. and more folks joined us and doors opened and we were engulfed in a sea of people and if I closed my eyes, reminded me of the trains back home. Just position yourself near an entrance and the crowd will do the rest.

So we scampered up the stairs, as since this was a blockbuster movie, was assigned one of the larger halls (close to 750 easily) with stadium seating. Let go of a seat next to a couple of desi boys and sat. People kept pouring in. Literally. More filed in, now looking for places, shouting out for the rest of the group, saving spots, asking folks to shift one seat down to make room for couples.

Of course there were grunts and giggles among a whole lot of “Idhar aao na, yahan sey straight view hai” and “Vivek is sitting in the corner, let this guy also go there na?” and ‘Really? You need 11 seats for your group? wow, you need a private seating” and “Is someone sitting in that single seat, would you mind?” and she plonks herself sniffling and sneezing to which the husband found great umbrage and shifted closer to me, which rarely ever happens I must say.

In all of this, we find another disgruntled-holiday-party-canceled-couple and we grinned at our resigned fate and holiday outfits and they settled next to us.

..and then the trailers started. O boy, I think all producers woke up from their slumber of last summer and got their thinking creative caps on! Coz, if the trailers are really any indication of what’s in store for us, thank your blessed movie stars (not the actors) that you are in for a treat! So feeling very smug, we open right into the movie and prison cells and our man looking haggard and worn and well, truly his part as he escapes from a high security prison in Russia, and for good measure also helps another convict escape. He comes in handy later on, but it was a goodwill gesture.

I loved the movie. Not the kind I liked the Mission Impossible series, but just on its own.

(Since I’ve rambled so much as a prelude, am going to bullet point salient features away, coz all of you will go watch it and you are going to have to go like it or not for your own sakes, so: ) 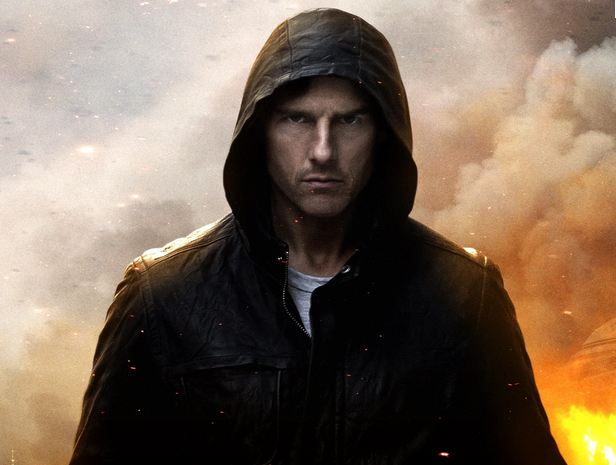 There’s some more, but that’s for you to watch and discover.

Can you tell am completely enamored by action movies. So much destruction, very little blood. I love my movies that way. Go watch! Cruise has certainly not left the building.

I’d give this a 4 and 1/2 stars. (now if you will excuse me, I must go watch the ones preceding it. Just for kicks)

Written By
Rads
More from Rads
p> You’re Jurassic Park!by Michael Crichton You combine all the elements of...
Read More