The new Pawan Kalyan movie – Panjaa – got my attention on twitter and when husband suggested we go catch the 10:20, I was motivated a little more than my normal :No, am tired, not tonight” – hmmm.. okay, ignore that excuse, but you get the drift. 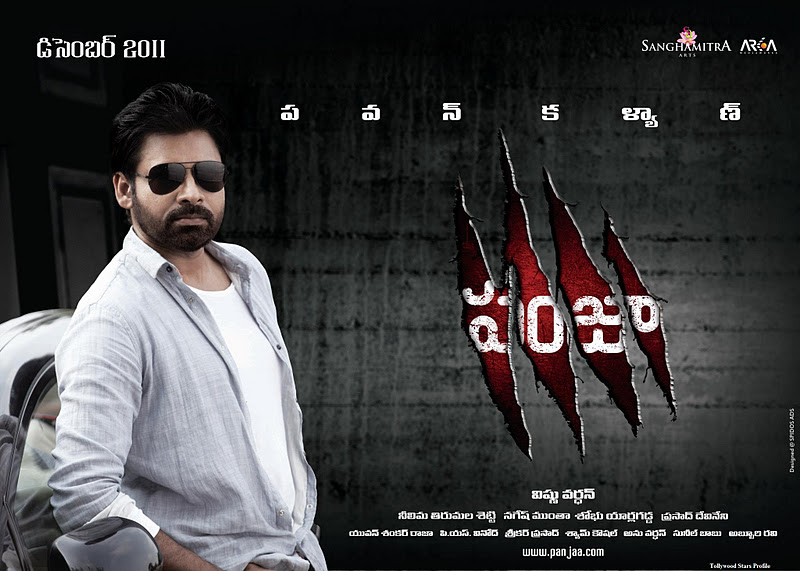 So off we went and was pleasantly surprised to see some folks we knew and some more that filled half the hall. Maybe paying $14 per ticket was not so bad after all we thought, as I settled down with some greasy nachos and cheese. (before you judge me, I made do with some soup for dinner so.. still, I know, am ashamed!) More folks piled in, and it must go on record that fully grown adult men are probably the most fickle when it comes to deciding where they wanted to sit and watch a movie. One trio moved around so much, that I almost heckled them! There were lots of groups and I even spied a few kids (which in retrospect was not a good idea at all, and not just because of the timing) and movie started on time.

The opening credits were some stylish graphics. That certainly created a favorable start to the movie.

I had no idea on the story and the movie, and since amnot subject to any kind of promos, am usually going in with an open blank mind. It helps tremendously that I can come out with an opinion untainted to the most part, except one that my own psyche offers.

So it started fine, with the mafia, mob, loyalties, rival gangs including fleeing rats established. The story was crisp until this heroine shows up. Then it softens considerably and it falters in holding onto its original premise on just being cold ruthless gangs. At many points, I was applauding the way a scene was going only to be shot down by the next. Be it slowing the pace or adding in an element that diverts from the original premise.

Movie was meant to be mafia-based. However, there was no establishing story for these mobs. Political, drug, cartel, prostitution or just plain ruling. Nothing was shown. Nothing was hinted. So there the mobs, and guns and grenades kept flying at each other with no firm base. RGV’s Sarkar had a political backing. This didn’t. It made the audience’s job harder on understanding what the war was all about.

Then it became personal. Very personal, and more angles kept coming in. More bad guys attacking our anorexic heroine, the continuous fights, and knives and spears. Romance was not such a bad idea except that the story lingered too long on it.Maybe that’s what the makers meant for it to do, but it didn’t do much for keeping the attention focused. Either it was a mob movie or it was a mob guy’s tragic story. Somehow one cannot imagine and accept a mob guy to be romantic and have a life behind a green house and a botanist. Am not saying it isn’t possible, just that either/or can take central stage. Having two diverse themes vie for attention equally messes it up. Having our hero walk off into the sunset didn’t do much for me at the end.

Comedy was timed well and Brahmanandam breathes some much need fresh air into the story. It’s funny how this part of the story stuck with me for a long time after, coz of its light comedy and much needed reprieve after all the senseless blowing people’s brains off first half of the movie. Though when you really think about it, this angle and story of some ass behind the girl, wasan addendum to an already heavy war left behind in Kolkotta. Why? I don’t know. I guess, we like complications a lot and solving them gives everyone a sense of purpose.

Then there was gore. So much gore, it needs a separate space of its own below.

There was a lot going for the story. Clutter got added in and it lost its perspective.

The first bar/club dance by Jahnavi was just useless waste of everyone’s time, money and effort. Nothing was going for it. It was a pretend “Sheila ki Jawani” where she now says “touch me”.

The best song was his dancing number – Paparayudu. I just noticed that it was Hemachandra – also featured on my blog 😉 – who sang it and by God – our brows un-creased and feet tapped, whistles flew and screams filled the hall. Everyone loved it. Maybe it was the song or maybe we all had it with the gore and were ready to cheer a bit.

The title song placed at the end reminds you of Magadheera’s final title track. Stylish and neat. Nicely done.

Pawan Kalyan: Before I go further, let me go on record and say I am not a huge fan of this actor. I think he’s decent looking and adds a good dose of attitude to his style, which can go either way, but when the scenes rolled, I remembered what annoyed me most about him. His dialog delivery. There is absolutely no enunciation of words where necessary and telugu rolls off his tongue way too smooth. It gets hard keeping track of what he says, and when one has to focus so much on dialogs, the rest kinda get lost, unfortunately.

I loved his whole mean look. Quiet, shooting from the hip, the sardar-without-pagdi look, and his demeanor. Suave, no talk, let my actions speak. ..and then he got all chatty. That spoilt his image to a large extent.

Thought he executed his part okay. Mob, hit-man, awkward lover, anguished hero (that he failed miserably at) and then the savior of all things right and integrity. His best parts were with Brahmandam, and the mass song therein. Completely out of character for the role he was executing, but ironically, that’s the part that stood out.

Sarah Jane Dias as Sandhya: If you saw Rockstar and thought Nargis needed some heavy duty acting lessons, this girl could learn from Nargis. No, am dead serious. After she put on some muscle and meat on those bones of hers, but not before she fixed her teeth. What the hell is happening with our Miss world contests these days?! ..and am rarely this harsh.

Anjali as Jahnavi:  The girl isn’t hot. She was supposed to be hot and sexy. She was a bar/club dancer who had the hots for our man, but he didn’t and then she got clubbed to death by this sadistic ass. What a role. The poor thing.

The two girls reminded me of these long distance runners. Bony with 1% body fat and not where it should be. Not that there is anything wrong with it, just that this was not a runners movie!

Jackie-Shroff – He should have stopped acting. After Hero. I loved him then. His eyes are now sunk deep, his face is dead pan and he isn’t a hunk no more. So well, he acted fine and did his usual chest-thumping my son stuff and then he got all cuckoo. Not convincing.

Ali and Brahmandam – coasted along fine, doing what they normally do with elan.

Tanikella Bharani – did a fine job. I like the guy. He reminds me of the kind of roles that Rao Gopal Rao used to do. All nice but sneaky.

Atul Kulkarni – Now this was a nice meaty character. I liked that role of opposing mob leader and escapist. Neatly executed and ended with a whimper. Sad.

Sesh Adivi as Munna: Guy plays his role with such gusto, that if you run into him at the elevator, you’d cower in the corner hoping you don’t breathe and offend him while looking like something the cat dragged in. Kinda steeped in hate and disgust, it must have took some sleepless nights for him to act like how he did. I wouldn’t be too surprised if he shows up as some sort of leading man sometime soon. He has a lot going for him. Just look at him!

Yeah, I had to! There was so much of it, that I intend to shred it to pieces. Movie would have been rated NC-17 for explicit violence and language. Sure words got bleeped out, but the un-necessary visuals of all violent acts was just not needed for any effect. I believe that the audience is intelligent and will think if you let them. Hinting at what was going on without actually showing it creates a cold terror. I was very disappointed with that part.

For instance:  Jahnavi’s killing. (similar to Asin’s badgering in Ghajini). Showing her getting smashed in face and then those plates falling on her, my own two cents is not show the victim, but the rage on the guy’s face. Gives room for the actor in question to improvise and expand, and allows the audience to imagine what he is doing. A blank that most adults can fill and is just a lot more subtle. So was Sampath’s piercing of the tree stump. We all knew when our hero was getting close to it and bleeding, did we really have to see poor Sampath’s contorted face with that stump through him?

There’s more but I’ll stop. The point is, am not against gore if it is used to prove a point where the premise calls for it. Why use an axe when a scissor could do the trick?

I can’t believe am actually observing the camera enough to write about it! But yes, some really lovely shots were used. Wide angle shot of Jackie wailing over his son’s body, the clean crispness of the fights from above, the close-up lingering shots on the actors’ faces. Good stuff.

The movie in execution had many instances of “little bits of this and little bits of that”. It’s still okay to borrow ideas – the creative medium allows such copying, but only if you make it your own. Without that, it just seems shameless pilfering and aping. Some worked well, some didn’t.

This and the escape scene. So much of Mission Impossible’s Moroccan street chase was mimicked, but it went well with the theme and it looked good. The scene where he starts running in grass was another deja vu. To me, it seemed  “Avatar”. Jahnavi’s death was Ghajini remake. Some told me there were Balu references.

The editing was again inconsistent. Some parts were zip-zap-zoom. Wonderful. No fuss and no muss. The pivotal point where lives change within a few hours, was brilliantly executed. From PK’s gambit with Sampath’s son, to Munna’s senseless action, to PK’s escape to Jahnavi’s brutal murder to Munna’s ultimate death. The movie’s only real kudos was to the flawless crisp way these 15 minutes were handled.

Same goes for the quick flashback of PK’s mom and sister’s rape and death. Quick and enough to get the message across.

There were no need for all the extra songs. Seriously. Am not going all RGV on you, but let a genre decide the existence and placement of songs! It’s time.

I’ll go ahead and give it a 3 stars. For effort. Coz you can tell there was some effort involved in putting this together. From where  I come from, Effort is respected higher than Achievement.

If we got this as a DVD, I may have walked away halfway. Coz when Intermission rolled, all of us went “what? there’s intermission and it is *now*?” Coz you see, we don’t get breaks for Hollywood movies, and most of the time based on length of Bolly/tollywood cinemas, we keep to that practice.

*and that’s probably the longest review I have ever written on a movie that didn’t really woo me!*

Written By
Rads
More from Rads
“Nothing is ever lost. If you have moved over vast territories and...
Read More